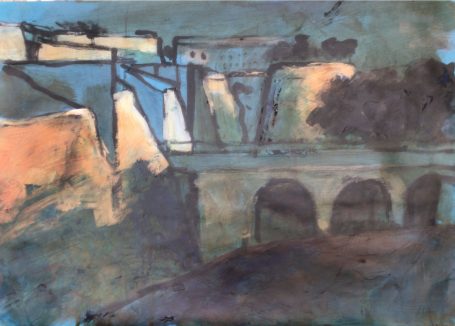 Celia Borg Cardona was born in Oxford, UK in 1957. She grew up in Malta but has also lived for intermittent periods in London. She graduated from the University of Malta in pharmacy in 1979. She then worked as a pharmacist for many years but her passion for art deepened and was taking an ever increasingly important role in her life. She acquired formal training at the Malta School of Art and then attended the studio of Anton Calleja for several years. Painting and sculpture have now almost completely taken over all her waking hours and she has for the last five years been a full time artist. In 2004 she decided to start exhibiting her work and since then she has had many solo shows. Celia has also participated in  group exhibitions including the European Parliament in Brussels, the European Commission in Brussels, the Musee de la Ville de Tunis, the AAF in London, the Vittoriano museum in Rome, the Embassy of Malta in Paris and most recently at the National Libraries of Torino, Cosenza and Rome.

Celia’s paintings can be found in many collections in Malta and abroad including The Farsons Foundation, Price Waterhouse Coopers and The Museum of Fine Arts, Valletta, The Embassy of the United States in Malta, the Vatican collection in Rome and the permanent collection of the European Parliament. Her work has also been featured in several publications.