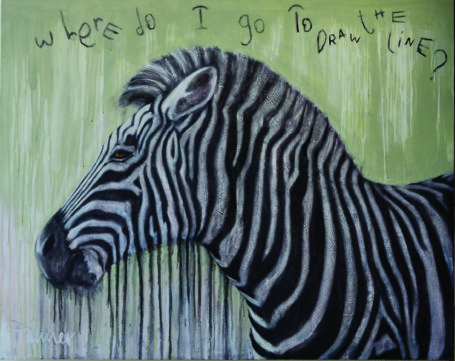 Christian Palmer is based in Byron Bay, Australia. He was born in London and educated in England. His works are a collision between the confines of an establishment of fine art background and the pull of urban contemporary street art movement; with its unrestricted communication and interaction through public spaces.

Palmer has travelled extensively in South America, Africa and Asia and eventually landed in Malta, experimenting with painting on the idyllic Mediterranean Isle of Gozo in collaboration with a group of like-minded artists, as well as setting up a boutique graphic design company. In 2001, he moved to Byron Bay where he published the ‘Byron Bay Diaries’ photographic journal and began working as a professional as a painter.

Palmer embraces the urban contemporary genre from a kind of mongrel fine art perspective. His work is a culmination of many years in the creative arts ranging from graphics and illustration to painting and stencil art. It is from the vantage point of an outsider that he reflects on our preconceptions and poses questions about the human condition. Canvas, wood, streetscapes and screen prints are all used to communicate lyrical art works, using a child’s writing, the most elementary graffiti. All his works involves a play of words and most of the subjects are animals. Palmer says ‘I like to choose animals that have an edge about them, animals that are representative of an outsider. From this perspective, I make sense of my own internal dialogue and the irony of the human condition.’

Palmer’s works are shown in galleries in Europe and Asia. He currently lives and works in Australia.