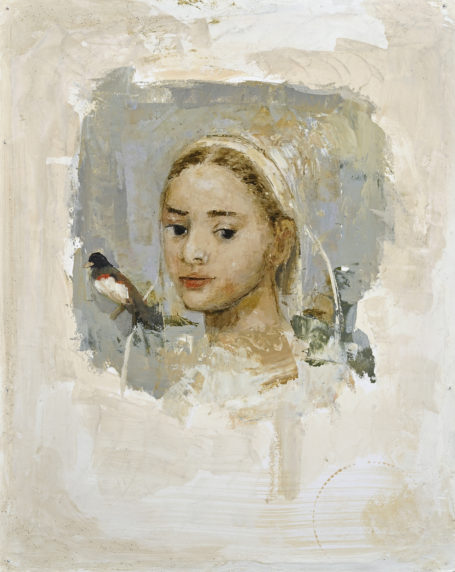 Ġoxwa began painting at a very young age and moved from Malta to London to study at St Martin’s School of Art. Years later she moved to Boston where she attended Emerson College for film and studies. In 1993 she had her first solo exhibition in Massachusetts, followed by sell out shows in New York, Strasbourg, Paris, San Francisco, and Boston. Ġoxwa has been awarded numerous scholarships, including a fellowship at the Cité Internationale des Arts in Paris, where she lives and continues to paint.

Her encaustic works on canvas defy categorisation. Although she draws inspiration from ancient frescos, her paintings have a contemporary feel. She explores all genres, yet all of her paintings gave the same element of mystery and intrigue. Over the years she has developed a mature style which is a happy marriage of age-old tradition and modern sensibility. The wax-and-oil-based medium she uses demands rapidity of execution because the paint dries quickly. It also provides a more solid-looking coat of paint, one which suggests the permanence of a wall as well as the fragility of what decorates it, and permits a richness and a liveliness of colour that recall both ancient Mediterranean art and modern Mediterranean scenery.

Walls, she says, are like masks, simultaneously concealing and revealing the living beings behind them. The backgrounds of her paintings are mottled with splashes of colour and seemingly disordered scratchings, And looming out of each them are figures, faces, trees, boats, bowls of fruit, sometimes cracked and spattered, but all of them solid, unmistakable, individual. They may be portraits of old friends or of a dear dead cat…They may be reminiscences of paintings in museums, of Byzantine or Russian icons. But they all have that double nature which it is this artist’s special gift to illustrate. They all have had their own separate histories in the hurly-burly of mortal life, and they all also hover in another timeless world where past and present and future are one. It is the kind of art which Yeats found in the ruined palaces of Byzantium, and which he called the artifice of eternity. (Extracted from an essay by Robert Wernick)