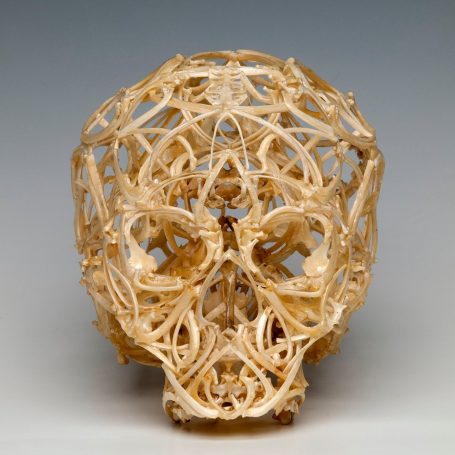 John Paul Azzopardi (b. 1978 in East London) is an exceptional artist.

John Paul had his first solo show called Hlejqiet in 2006 in Malta. In 2010 he participated in several collective shows such as New Generation at the Malta Contemporary Arts, Valletta, Malta, and also took part in competitions hosted by the Malta Society of Arts, Manufacturers, and Commerce. In 2011 Heritage Malta hosted Curved Silence at the National Museum of Fine Arts in Valletta which presented one of his untitled masterpieces depicting a violin. His work was also exhibited at The Venice Biennial in the Maltese Pavilion in 2017.

He uses many different materials both organic and man-made, including bone – and it can take many months for him to complete a single artwork. The themes of his work vary – from mythology, history and contemporary issues, with philosophy taking the front seat.

John is also an electrical engineer and obtained his B.A. (Hons) degree in Philosophy at the University of Malta in 2008. He has worked on many productions and with many artists, such as Raymond Pitre’, European Chamber Opera Company, Olphaert Den Otter, Birkkuni, and Cyprien Gaillard.