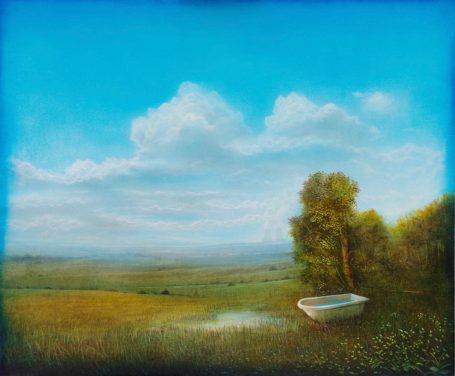 Naoya is a Japanese visual artist. He lives and works in London and Tokyo. He was born and raised in Kanagawa. In 2012 he graduated from Tokyo University of the Arts, where he specialised in oil painting. He lives and works in Tokyo and London. His works are included in the Takahashi Collection[1] and in the Benetton Foundation.

Inose’s work explores the tension between the natural world and its grasping appropriation by human influence. Inose uses oil painting techniques to create both meticulously realistic landscapes and abstract oil paintings on canvas. His works of art create an inquiry of our relationship and understanding of nature. Inose also creates a debate on the role of the original masterpieces and how this has changes in the contemporary postmodern world. His home country Japan, which is constantly threatened by natural disasters, is a source of inspiration for his work: “Japan is well-known for its disasters, the country is in fact still recovering from the latest tsunami. Japanese people are always afraid of when the next disaster will strike. This may be the reason why the fantastical is such a popular theme in famous film productions like Godzilla, which is widely thought to be a metaphor for the war. This is the reason why I think art goes beyond the immortalisation of reality. Art exists to portray a much deeper meaning. This also explains why my own art is a mixture of reality and the fantastic as I use the latter to expose the problems I see around me.”