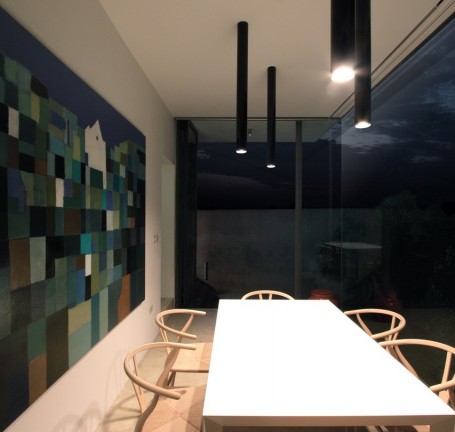 A few years ago, Richard England’s celebrated ‘Villa la Maltija’ and its surrounding gardens in San Pawl tat-Targa were demolished to make way for semi-detached villas. Permission was granted for the developers to divide the estate into parcels of land with an average area of 250 square metres each. One of these lots was entrusted to Chris Briffa Architects.

The past six years has seen a busy construction landscape of the twenty or so structures in San Pawl tat-Targa – each by a different owner employing a different architect – all designed and built at pretty much the same time; yet all very different from each other. A sort of microcosm of local middle-class architectural tastes, the neighbourhood varies in style; from traditional to modern to nondescript. One of these lots was entrusted to Chris Briffa Architects, who designed and recently completed this sculptural white cube with seemingly very few apertures, hanging over a narrow but gripping side-garden. The clients – a family of three – needed to capitalise on their modest 250 square metres of land.

While zoning regulations allowed only 40% site coverage, they presented the architect with a very demanding brief: an open plan living area, a separate dining room, two large bedrooms with bathrooms, an independent home-office, a study, a three-car garage, a pool, as much garden as possible and an area to enjoy their daughter’s piano playing.

After numerous hours of design planning and meetings, Briffa proposed cantilevering practically half of the house over the pool area, in order to liberate more space in the garden, while still falling within planning regulations. A scale model illustrated the proposal’s use of space, with a skillful juxtaposition of exterior and interior spaces, and the clients agreed to the design. The layout not only satisfied their brief, but also provided a generous outdoors area compared to the small side-terraces of similar surrounding properties. The clients moved in at the end of 2011, after a saga of permit delays, construction hiccups and bespoke interior finishing.